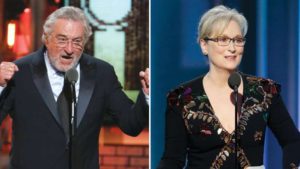 Variety magazine poses a question that is giving me fits, but I have reached a conclusion.

It asks whether televised awards shows that honor entertainers should become a forum for honorees to spout their political views.

The Emmys, Screen Actors Guild and Golden Globes ceremonies have been most memorable for the political speeches that actors and others in the entertainment industry deliver while accepting their trophies.

Are their opinions of some value? Sure they are. Are these ceremonies the place for them to make those views known to the entire world? I don’t believe so.

I have long believed in the “There’s a time and place for everything” theory. I have this admittedly old-fashioned view that awards ceremonies are intended solely to honor those who get paid lots of money to, um, entertain us. That is why I watch them — on the rare occasion that I do.

You may spare me the rebuttal about “freedom of speech,” and “First Amendment guarantees” and this being a “free country.” Believe me, I get all of that. I understand the argument in favor of those who want entertainers to deliver us their political views on the issues of the day.

I also am acutely aware of the entertainment industry’s left-leaning bias. These folks, to be candid, are preaching to the choir if they are talking to me. I share their bias. Thus, I don’t need to hear points of view that merely affirm what I already believe.

All I want from entertainers is for them to perform up to the standards we all expect of them. Whether they think badly of the president of the United States or of certain members of Congress or of governors of certain states is irrelevant.

Good grief! We’re inundated with opinion 24/7 on cable TV shows, in various publications, and in blogs — such as this one.

Entertainment awards ceremonies need not be a forum to feed me more of the same.

Count me as one American who has no problem with former White House press flack Sean Spicer making a surprise guest appearance at the 2017 Emmy Awards show.

I didn’t watch it live. I have no interest in entertainment awards shows.

But I heard about Spicer’s surprise cameo this morning. I saw the clip of him coming onstage behind the kind of mobile podium that the comedian Melissa McCarthy made famous in her “Saturday Night Live” skits mocking the embattled press secretary.

I heard about the “mixed reaction” to Spicer’s appearance. I also saw a column in this morning’s New York Times by one of my favorite columnists, Frank Bruni, who is just outraged that Spicer would do such a thing.

Good grief, dude. Get a grip.

I thought Spicer’s act at the Emmys was damn funny. I laughed out loud when I saw it this morning.

What does it tell me about this guy? It tells me he has a sense of humor. It tells me he doesn’t take himself super-seriously. He was able to poke fun at himself. I also could argue that in showing a self-deprecating side, he also poked a bit of fun at his former boss, Donald J. Trump, the president of the United States of America.

To the critics of Spicer’s guest gig at the Emmys, I want to say only to chill out. The guy was damn funny.

There’s a saying that a free press’s key mission is to “comfort the afflicted and afflict the comfortable.”

At the risk of sounding like a whiny baby who never got invited to one of these gigs, allow me now to say that the Washington Correspondents Dinner is a disgrace to the high-minded mission that the D.C. press corps is supposed to fulfill.

Check out this essay about what’s become of this annual event:

There’s something more than mildly offensive about seeing reporters and their dates parading along a red carpet, a la the Oscars, Tonys, Emmys and the ESPYs.

Those of us who toiled out here in the Heartland — aka Flyover Country — always have thought there ought to be a natural tension between the power brokers and those who cover them, reporting on their dealings to the “unwashed masses” who depend on journalists to tell them the truth.

Here’s how Patrick Gavin describes the event that occurred over the weekend: “What started off decades ago as a stately formal celebration of the best of presidential reporting has morphed into a four-day orgy of everything people outside the Beltway hate about life inside the Beltway—now it’s not just one night of clubby backslapping, carousing and drinking between the press and the powerful, it’s four full days of signature cocktails and inside jokes that just underscore how out of step the Washington elite is with the rest of the country. It’s not us (journalists) versus them (government officials); it’s us (Washington) versus them (the rest of America).”

Boy, howdy. I couldn’t have said it better.

The D.C. press corps has become something of an echo chamber, where journalists parrot each other’s views and simply cannot wait to be seen in the company of the famous and the powerful. In their own minds, that seems to fit the description of the people who cover government.

I loved Gavin’s note that unlike some of the other dinners — such as the Gridiron — where presidents occasionally are absent, POTUS’s attendance at the correspondents dinner seems to be required. Gavin writes:  “The last president to skip it was Ronald Reagan in 1981 and — let’s cut him some slack — he bailed because he had just been shot.”

The press’s mission to afflict the comfortable now seems almost quaint. How can it do so when the comfortable include the very journalists who keep slapping the backs and yukking it up with the folks they are sent to cover?

I much prefer the tension that is supposed to exist between the media and the government. It keeps everyone — reporters and their sources — a little more honest.