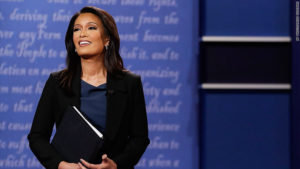 Elaine Quijano has earned a good word on this morning after the vice-presidential “debate.”

As I look back on it after a good night’s sleep, my conclusion is that it wasn’t totally her fault. She sought to reel in the fellas, sought to keep them answering the questions, she sought to avoid the constant interruptions that were initiated by the amped-up Kaine.

She got caught in a buzzsaw of campaign rhetoric, throwaway lines, talking points, insults and, oh yeah, the occasional policy differences that emerged from the candidates.

I want to echo something I heard last night from the post-“debate” analysis about the best question of the evening. It dealt with candidates’ religious faith and how it informs their public policy.

Both men exhibited clear understanding of faith and explained in clear and concise language how it works for them in their public life. Bravo to them both for ending the evening on somewhat of a civil note — and bravo to Quijano for the question.

As we’ve been seeing, though, in these joint appearances, the media moderators are becoming a bit of a distraction. Dating back four years ago when CNN’s Candy Crowley corrected GOP nominee Mitt Romney’s incorrect assertion that Barack Obama didn’t call the Benghazi attack an act of terrorism, media and politicians have been waiting for future moderators to interject themselves into the political dialogue.

From my perch out here in Flyover Country, though, I believe she delivered a creditable effort at staying above the fray. I only wish the candidates would have done a better job of focusing on the issues at hand. 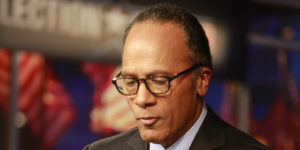 Call me an old-school fuddy-duddy.

Lester Holt of NBC News has a big task ahead of him Monday night. He gets to moderate the joint appearance between Democratic presidential nominee Hillary Rodham Clinton and Republican nominee Donald J. Trump.

I liken his role to that of an athletic event referee. The best officiating jobs are done by those you don’t notice.

Accordingly, some of the chatter leading up to the event has been whether the moderator should correct candidates’ misstatements.

I’ve thought about this for about the past four years and I’ve concluded that Holt should not interfere. He should not interject himself into the storyline. He shouldn’t become part of the story … as CNN’s Candy Crowley did in 2012 when she corrected a statement that Mitt Romney made about whether President Obama had declared the fire fight at the U.S. consulate in Benghazi, Libya to be a terrorist attack.

Her job then — and Holt’s will be Monday — was to ask questions of the candidates and to let them correct each other if and when the need arose.

If the moderators were to correct the candidates, then how do they determine which misstatements they let pass and which ones do they correct?

I prefer that they not make the call.

Of course, given the nature of social media these days, a non-call also would become “news.” Commentators no doubt would make them have to answer for their decision to let the candidates’ statements go unchallenged.

Still, my old-school tendency leads me to believe the moderator’s job isn’t to become a fact-checker. It is to be a referee. The best refs are those we don’t notice during a competitive event.

Then we can wonder: Are we treating them in a “fair and balanced” manner?

In the 2012 debate between Republican presidential nominee Mitt Romney and President Barack Obama, Romney asserted that Obama failed to refer to the attack in September of that year on the U.S. consulate in Benghazi, Libya, as a “terrorist” event.

Moderator Candy Crowley of CNN corrected Gov. Romney, telling him at that moment that the president did make such a declaration.

Political conservatives went ballistic, saying Crowley had no business interjecting herself into a political debate.

OK, did Kelly interject herself into the debate in the manner that Crowley allegedly did in 2012? If so, where’s the outrage — from the right?

And, for the record, both Crowley and Kelly acted appropriately in both instances — in my oh-so-humble view — in setting the record straight.