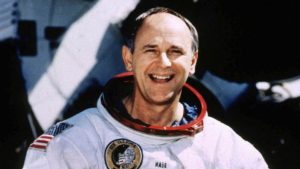 It was 48 years ago. A giant rocket sat on a launch pad at Cape Canaveral, Fla.. Perched atop that beastly Saturn rocket was a space ship carrying three men.

They would make history a few days later on that Apollo 11 mission. But on July 16, 1969, they launched into the sky, took off into orbit, then fired those on-board rockets to propel them to the moon.

The late Neil Armstrong set foot first on the moon. A little while later, Edwin “Buzz” Aldrin hopped off the ladder onto the sandy lunar soil. Meanwhile, their crewmate Michael Collins circled above, orbiting moon.

The world — the entire planet — held its breath as Armstrong proclaimed he was taking “one small step for (a) man, one giant leap for mankind.” We cheered, cried and prayed for their safe return.

Space travel hadn’t yet become “routine,” as if it ever should have been thought of in that light. The Apollo missions would put several more men on the moon. Then we would have Skylab and then the shuttle program.

They’re all gone now. All those missions are history. Yes, Americans are still flying into space, but they’re doing so aboard Russian rockets. Try to imagine how President Kennedy would feel about that!

I am old enough to remember the old days. I also am young enough at heart to wish for the day we can return yet again to full-fledged space travel — even though it’s never routine.

Oh, how I wish I could read minds.

This video is making the Internet rounds. Donald Trump is talking about space travel. The fellow on the right is none other than Edwin “Buzz” Aldrin, one of two men who walked on the moon during the Apollo 11 mission in July 1969.

A lot of would-be mind readers are conjecturing about what Aldrin might be thinking. He looks alternately bemused, confused, aghast and flabbergasted at what he’s hearing from the president of the United States.

Oh well. I just wanted to share it here. You be the judge on what is going through Buzz Aldrin’s mind.

Might there be someone who can ask the space hero what he was thinking? Would he tell us the truth? Hey, it’s worth asking. 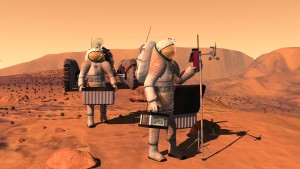 Space travel always has intrigued me.

I wanted to fly into space. Indeed, I applied once for NASA’s “journalist in space” program, hoping the space agency would pick me to be the first working journalist to report from Earth orbit.

The program ended on Jan. 28, 1986, when the shuttle Challenger blew up, killing all seven crew members — including the first teacher ever chosen for a space mission.

Well, we’ve been to the moon. Twelve men walked on its surface, making them quite an exclusive club of adventurers; there should have been 14 of them, except that Apollo 13 didn’t make it to the moon’s surface.

One of those men was interviewed by the AARP magazine and was asked about a possible — if not probable — flight to Mars.

Edwin “Buzz” Aldrin, the second man to set foot on the moon during the Apollo 11 mission, said the greatest danger facing those who land on Mars will be “mental status. It is the growing isolation, the irritation, the realization that this is the way it’s going to be.”

I’ve tried to ponder over the years as a Mars mission became more of a probability: How does NASA find the right person to participate in a mission that will take years to complete?

What in the world does the space agency ask the prospective candidate?

How will you cope with knowing you’re going to be many millions of miles from Earth? How willing are you to accept the possibility that you might not return home? The moon missions were a relatively simple mission compared to this one; do you have what it takes to spend years in a space suit?

I guess I am intrigued by the psychological makeup of the individuals chosen to make this journey.

However, if my luck holds out, I’ll be around to see it and if my luck is even better, I’ll have enough of my marbles still intact to know and appreciate what’s happening in real time.

I pray that he’s right.

It has a fascinating ring to it. Who would have thought the nation’s premier space hero, daredevil test pilot, the first man to ever walk on the moon would have squirreled away some artifacts from humankind’s most daring adventure?

The First Man on the Moon died in 2012, and his widow, Carol, has uncovered a trove of goodies she discovered in his closet.

I think it’s quite cool that he managed to sneak this stuff past his NASA bosses.

The artifacts were supposed to have crashed into the moon, along with the Apollo 11 lunar lander, which Armstrong and Buzz Aldrin left behind in lunar orbit in July 1969 when they hooked up with Michael Collins in the command module. Armstrong, though, brought the items home with him.

They include a camera used to take pictures on the moon as well as some gizmos and gadgets that had been stuffed into a bag and placed in Armstrong’s closet.

Hey, these items aren’t secret weapons, nor do they require some kind of top-secret clearance to handle.

I can recall coming home from the Army in 1970 with some items I was supposed to turn into the quartermaster’s office as I was transitioning back to civilian life. I still have my trusty entrenching tool, issued to me in 1968 and, by golly, I still use it around the yard. I can’t recall how I got it past the supply sergeant back then.

Mrs. Armstrong’s discovery has been turned over to the Smithsonian Institution’s Air and Space Museum, where I’m sure it’ll be put on proper display.