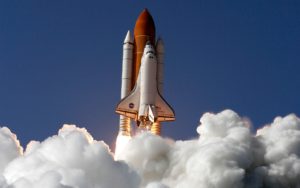 The thought just occurred to me that of the original men chosen to fly into space, only one of them remains among us.

From what I understand, Glenn remains in good physical condition. But, hey, he is 94. At that age, you live one day at a time, or so many of the 90-somethings I’ve known have told me.

What troubles me particularly about Glenn’s advanced age is that once he leaves us, there will no one left from that exhilarating time who can argue forcefully for the return of the manned space program in this country.

The Bush administration announced plans to retire the space shuttle program and then the Obama administration followed through with the plan. Two of the shuttles were destroyed by tragic accidents, leaving just three ships in use: Atlantis, Endeavor and Discovery. Challenger blew up shortly after liftoff in January 1986 and Columbia — with Amarillo’s Rick Husband in command — disintegrated upon re-entry in February 2003.

After the final shuttle mission — the flight of Atlantis in July 2011 — U.S. astronauts have been ferried into space aboard Russian rockets to spend time in the International Space Station. Think of that for a moment. During the height of the space race, of which Glenn was a major player, it would seem unthinkable that we’d ever have to depend on our adversary to take our astronauts into space.

We’re not hearing much talk during this presidential election campaign about the future of manned space travel. We don’t know whether Republican Donald J. Trump or Democrat Hillary Rodham Clinton will light the fire that re-ignites our national pride in the effort to explore beyond the bounds of our planet.

I know that NASA is working on a new launch vehicle that will take humans into space. I understand the space agency has plenty of work on its plate; it has unmanned probes to launch and plenty of research to complete. NASA, though, seems to be working in a closet. Does anyone ever hear updates, progress reports on the development of that launch vehicle?

Americans have few legends who can speak with authority on such things. John Glenn — who later served several terms as a U.S. senator from Ohio — is one of them who can speak with clarity and credibility on the value that space exploration brings to us.

If only we could keep him around forever.

We cannot, of course.

I get that we have a lot of pressing issues that are consuming presidential candidates’ time and attention.

My hope is that we will start hearing from one or both of the major candidates about how they intend to accelerate our return to space exploration.

I relished those mornings awaiting those flights by John Glenn and his early astronaut colleagues. I’m ready to get excited once again.