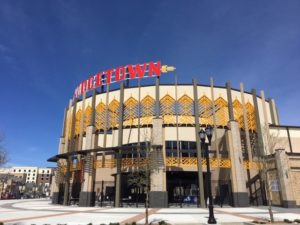 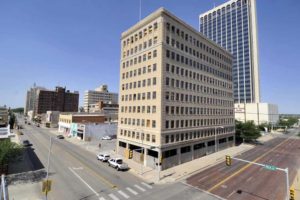 This story remains a serious head-scratcher for me.

I’ll be glad to be proved wrong if and when the story concludes.

They have begun work on a 10-story eyesore in downtown Amarillo, Texas. The Barfield Building, which has gone through many fits and starts as it has decayed over the course of many years, is now in the first stages of a major makeover.

It will become a boutique hotel run by the Marriott company, which also operates a hotel down the street in the historic Fisk Building.

To be candid, I never though this project was possible. The Barfield, a once-proud structure on Sixth Avenue and Polk Street, has been shuttered while would-be developers have shuddered at the prospect of bringing it back to life.

The building’s former owner, Todd Harmon, sought over the years to get something done. He failed. Coury Hospitality is now the management partner and is handling the makeover as it proceeds.

My pal Dan Quandt, vice president of the Amarillo Convention and Visitors Council, told KFDA NewsChannel 10 that “We’ve been crying” for years for something good to happen to the Barfield. “It sadly went from being a proud lady to a kind of an eyesore and now they’re going to be redoing that.”

Actually, Dan, there’s no “kind of an eyesore” description needed. The building is a serious eyesore.

It’s going to carry the name of Barfield Marriott when it’s all done.

I no longer live in Amarillo, but my desire to see downtown Amarillo progress and evolve into something different and, hopefully, exciting hasn’t wavered. The Barfield project is a huge step forward for the city, which has granted serious tax credits and other financial incentives to help push this project forward.

Let us hope this task gets completed. I am hoping to be pleasantly surprised when they cut the ribbon and welcome the first guests into the new digs.

Then perhaps the city can turn its attention to another rotting structural hulk just a few blocks north. I refer to the Herring Hotel.

Might there be a brighter future in store there as well?

I’m going to keep an open mind on this one.

Amarillo has surrendered hotel occupancy revenue while it has delivered tax breaks to businesses seeking space in the city’s downtown business/entertainment district.

As a result, hoteliers across the city might start charging guests a 2 percent surcharge to make up for the revenue shortfall.

It’s a bit of a complication in the city’s effort to revive its downtown district. One option might be to form a public improvement district (PID) that sets aside revenue for, well, improvements to certain areas or neighborhoods.

Some hotel owners are miffed that the city is considering adding the surcharge to their guests’ hotel bills. One of them asked: “Why is it always my guests that you are going after?”

This is a curious development. On the one hand, the city appears to have deprived itself of a revenue stream that it might have been able to project it needed down the road. If the city didn’t foresee the shortfall, why did it proceed with offering arguably too-generous tax incentives to businesses coming into the downtown district?

The Amarillo Globe-News reported: “Bobby Lee, who co-owns The Big Texan Steak Ranch and serves on the CVC board, said that while it’s a shame the tax revenue is being eaten up by downtown projects the typical tourist will never use, it’s important for hoteliers to look at and consider alternative ways to rebuild that revenue stream.

Ouch! I kind of wish he hadn’t used such, um, descriptive language when talking about this matter.

Dan Quandt, vice president of the Amarillo Convention and Visitors Council, said the CVC plans to conduct some informational meetings in January to educate residents. He said the city is full of too much misinformation about the proposed PID.

OK, then. Let’s explain it, Dan. Be thorough. Keep it simple.

Those of us who are undecided cannot straddle the fence forever. 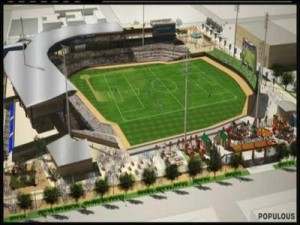 The cockamamie decision to merge the Amarillo minor league baseball team with the team in Grand Prairie seems to have gummed up the works in Amarillo’s planning to develop its downtown event venue.

By definition, the place would be home to multiple uses. Hence, the name “multipurpose event venue.”

The City Council has ratified the voters’ decision to proceed with the MPEV. The ball — so to speak — is now in the hands of the Local Government Corporation, which the council created to carry out council policy.

The baseball franchise merger was announced as being for the 2016 season. The Thunderheads and the AirHogs will play 50 “home” games, with 25 of them in Amarillo and 25 in Grand Prairie. The league where the teams play said in a statement that it expects the teams to return to their home fields perhaps by 2017. We’ll see about that.

Does this mean the MPEV is a non-starter, that the ballpark element no longer will be applicable? Not in the least.

The $32 million venue will have 4,500 or so permanent seats. That’s enough to accommodate a well-run Class AA baseball team. Once they break ground on the venue, my hope would be that the Chamber of Commerce, the Convention and Visitors Council, Center City, Downtown Amarillo Inc., City Hall’s senior administrative staff and anyone else with a bright idea or two start a coordinated marketing effort to bring that franchise to Amarillo.

Meanwhile, there are plenty of other opportunities to use that complex. There has been talk of “family nights,” of church-related events, downtown-related parties and perhaps even outdoor concerts occurring at the MPEV.

Are any of these out of the question? Not by a long shot.

Like a lot of other Amarillo resident, I also am scratching my head over this franchise-combo idea. On the surface it looks for all the world like a loser for both cities. To be candid, I don’t know how this is going to work well.

The goofiness of this decision, though, need not preclude the attractiveness of a new sports/entertainment venue in downtown Amarillo. If it means doing business with another league and another baseball franchise, then that’s fine.

The task, though, rests with the marketing experts who can make it work. 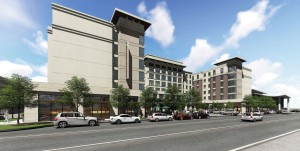 He runs the Amarillo Convention and Visitors Council and, quite naturally, is glad the proposed $32 million multipurpose event venue received the voters’ endorsement earlier this month.

But as he told the Rotary Club of Amarillo this afternoon, he wishes city planners could have come up with a different name for the facility to be built across Seventh Avenue from City Hall.

But, hey, as long as we’re stuck with the acronym, Quandt suggested it stand for “multiple people entering our vicinity.”

He noted that 60 percent of the city’s revenue comes from sales tax collections — and a good portion of that revenue comes from those who don’t live here. They are traveling through the city or are spending a night or perhaps longer here.

Quandt also noted something most Amarillo residents likely don’t know. It is that Amarillo has as many hotel rooms as Arlington, a city of nearly 400,000 residents sitting, as Quandt said, “in the heart of the Metroplex.” He also pointed out that Arlington is home to the Texas Rangers and a “professional football team that plays there”; he must not be a Dallas Cowboys fan. Whatever …

Amarillo’s fortunes are bound to improve with construction of the MPEV and the completion of the new Embassy Suites hotel across the street from the Civic Center, which he said is in line eventually for some “long-awaited” improvements and expansion.

One would expect Quandt to speak well of the MPEV and the city’s downtown future. He’s in the business of promoting the city.

However, from where I stand, Quandt and other city boosters are going to have quite a bit more material with which to lure visitors to our city.