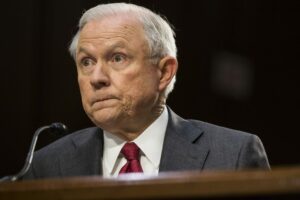 Wow! A fabulous political melodrama might play out way down yonder in Alabama.

Jeff Sessions wants his old U.S. Senate seat back and plans to announce his candidacy for the Republican Party nomination. Oh, but get a load of this: He gave up his Senate after Donald Trump nominated him to be attorney general; the Senate confirmed him narrowly.

Then he pi**ed off the president royally by recusing himself from the Russia probe. He couldn’t in good conscience investigate himself, given that he worked on Trump’s presidential campaign, which found itself caught up in allegations that it colluded with Russians who attacked our electoral system in 2016. So he followed DOJ policy by recusing himself.

His act of conscience enraged Trump.

So, the previous 2020 Republican favorite for the Alabama seat happens to be a former state Supreme Court chief justice. Roy Moore had been kicked off his bench seat twice on allegations that he violated constitutional principles. Then he got ensnared in allegations that he dated underage girls and had sex with them. He ran the Senate from Alabama anyway. He got nominated in 2017 by the GOP. Trump had endorsed the incumbent appointed to succeed Sessions in the Senate, then backed Moore when the former judge won the party primary.

Then Moore lost to Democrat Doug Jones in the fall special election. Trump campaigned for Moore, but was unable to push Moore across the finish line to victory.

Here we are, in 2020. Jones is running for re-election. Moore is running in the GOP primary. Now, reportedly, so is Sessions.

What will Trump do? Does he back Moore again, even though his earlier endorsement proved futile; plus, we have the notion that Moore is unfit for elected office at any level, given the seemingly credible allegations of misbehavior?

Or does he back Sessions, who at least has prior U.S. Senate experience? I find the former senator/AG to be objectionable anyway, but he is a damn sight better for the job than Roy Moore. Remember, too, the many nasty things he said about Sessions when the then-AG backed out of the Russia investigation.

Meanwhile, we have Sen. Jones ready to cruise to his own party’s nomination. What might he do? How might he play all this out?

I am aware that only the good folks in Alabama will have a say in who they elect to the U.S. Senate. However, these men and women enact laws that affect all Americans. Therefore, what is Alabama’s business becomes our business, too, way over here in far-off Texas.

If I had a vote in Alabama, I would stick with the incumbent, Sen. Doug Jones.

Hold on a second! I thought I read a time or two that the Ku Klux Klan was seeking to remake its image, that it was going to a sort of “kinder, gentler” hate group.

I must have dreamt it. The KKK is reverting to form.

A Mississippi Klan chapter has issued what it said is a “call to arms” to protest a decision to allow same-sex marriages to occur next door in Alabama.

Where I come from, a “call to arms” means what it says: that you are going to take up arms and fight someone — in this case, presumably the federal government. Also, where I come from, that sounds like sedition, which means to plot against the government, to mount an armed rebellion. And isn’t that an act of treason, punishable by, um, death?

A Ku Klux Klan grand dragon/serpent — a guy named Brent Waller — said this on a website post: “We as White Christians intend to see that no outside agitators bully or intimidate the White Christian majority in the State of Alabama. We salute those like the chief justice (Roy Moore) for standing against the Immoral, Ungodly and activist Federal Judges.”

How will they do that? Are they going to shoot someone?

This nimrod needs to know that the federal judges who are ruling against statewide bans on same-sex marriage are acting totally within the law. The Constitution gives them authority to interpret the nation’s government framework, which they’re doing by declaring the 14th Amendment to the Constitution protects all Americans’ right to “equal protection” under the law. I will restate right here that all Americans means everyone, no matter their sexual orientation.

History has demonstrated time and again — for more than a century — that the Klan doesn’t believe in the Constitution.

Judicial activism is alive and well on one state’s bench, and it’s not a state where one would expect to find such a thing.

It’s in Alabama, where the chief justice of that state’s Supreme Court, has decided that the Highest Court in the Land — the United States Supreme Court — declined to overturn a lower federal court ruling that overturned the state’s ban on people marrying others of the same gender.

The high court, then, in effect endorsed the lower court ruling. The state’s ban on same-sex marriage is overturned, along with bans in 38 other states — including Texas.

As USA Today notes in an editorial, same-sex marriage has become as divisive an issue as the civil rights battles were in the 1950s and ’60s. Most Americans support same-sex marriage now, although in the Deep South, opponents of it remain in the majority.

Still, the entire nation is governed by a single Constitution and the federal courts are empowered to interpret that document in the manner they deem appropriate.

Federal judges have been striking down the bans generally on the grounds that they violate the 14th Amendment to the Constitution, the one that guarantees “equal protection” for all citizens under the law.

Justice Moore, though, doesn’t see it that way, even though he swore an oath to protect and defend the U.S. Constitution.

Don’t conservatives oppose judicial activism? Don’t they rail continually at judges who put their own bias above the law?

Alabama’s top state judge is on the wrong side of this issue. Period.

An interesting back story may be developing with the latest federal judicial order striking down same-sex marriage in yet another of our 50 states.

Alabama’s same-sex marriage ban has been ruled unconstitutional by U.S. District Judge Callie V.S. Granade, who ruled in favor of a lesbian couple that had married in California, moved to Alabama and sought to have the state recognize the adoption of their son.

Where’s the back story?

Judge Granade was appointed to the federal bench by Republican President George W. Bush, a noted opponent of same-sex marriage.

Here lies the beauty, in my view, of the federal judicial system. Judges get lifetime appointments and that frees many of them from the raw political pressure that often mounts against, say, judges who are elected on partisan ballots.

The federal judge who ruled the Texas same-sex marriage ban unconstitutional is a Barack Obama appointee and some on the right have dismissed her ruling as the work of a partisan hack.

What about Judge Granade’s ruling, which like the rest of the state laws that have been struck down, was based on the U.S. Constitution’s 14th Amendment provision that guarantees “equal protection” under the law for all U.S. citizens? The couple in question here, Cari Searcy and Kimberly McKeand, fit the bill as true-blue, red-blooded American citizens.

Alabama Gov. Robert Bentley, also a Republican, is going to determine whether to appeal the ruling.

Well, he ought to wait on another court — the U.S. Supreme Court — which will hear arguments in a few weeks on another case involving this issue. It will determine before the term ends this summer on whether state bans violate that pesky 14th Amendment.

Let’s not bemoan, meanwhile, these rulings by “unelected judges.” They’re unelected for a good reason.