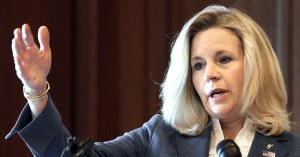 Roll this one around for a moment: A critic of this blog believes U.S. Rep. Liz Cheney is a “sellout” because she doesn’t profess loyalty to Donald J. Trump.

This critic, a fellow with whom I worked at the Amarillo Globe-News — and a guy I still consider to be a friend — predicts that Cheney will lose badly in the Wyoming GOP primary in August. He’s probably right. However, it is worth asking: why?

She is likely to lose because most Wyoming Republican primary voters believe the same as my critic/friend, that she has “sold out.”

To whom? Or to what?

I want to be clear about something. Liz Cheney remains an ardent conservative lawmaker. She is far too conservative for my taste. However, she takes her responsibilities seriously and is faithful to the core of her being to them.

My view is that she has sold her soul to the search for truth behind the 1/6 insurrection. Cheney has sold out, too, to the oath she took when she joined Congress nearly eight years ago. That oath was to the United States Constitution, to the laws of the land and to the government; she did not pledge an oath to an individual.

Cheney is a “sellout”? If that’s how these right-wing, Trumpkin Cabal of Kooks define the term … well, I welcome it!