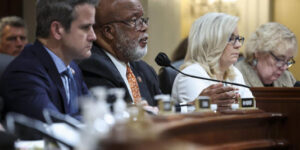 As a general rule I dislike attaching the word “martyr” to run-of-the-mill politicians, even when they do extraordinary things.

Liz Cheney is one of those pols who also happens to be doing something that in an earlier era wouldn’t merit the kind of praise she is about to receive from this blog.

The Wyoming Republican congresswoman is standing tall for the rule of law. She is calling a former GOP president precisely what he is: an existential threat to the nation’s representative democracy.

Cheney is likely to pay a grievous political price soon in the Wyoming Republican primary. She appears slated to lose her primary fight for a fourth term in the U.S. House.

And why? Because Wyoming Republican voters have swallowed the swill offered by the former Liar in Chief. Donald Trump’s Big Lie has gained traction among the gullible voters who appear to be the most dedicated among the GOP faithful.

As we have learned during the House hearings on the insurrection — which Cheney has been a key principal — Trump doesn’t give a rat’s a** about the Constitution. His loyalty belongs only to himself and he has demanded it of those who worked for him in public life.

Liz Cheney has pushed back against the ex-POTUS’s sociopathic tendency only by insisting that he follow the law.

That she would be punished for that is reprehensible in the extreme. Yet, polling data suggest at this moment that Liz Cheney is going to lose her primary battle to return to Congress.

It boggles my mind that anyone with half a noodle in their noggin could believe the liar who once masqueraded as president of the United States.

I fear that such a travesty is going to unfold and a congresswoman who is fighting for the truth will pay the price for such ignorance.