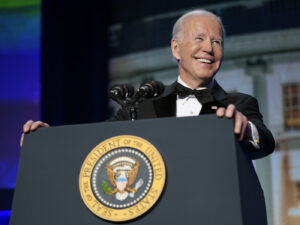 This much came through as I watched President Biden do a brief comic riff from the podium at the newly reinstated White House Correspondents’ Dinner.

It is that he ain’t no Barack Obama, one of his predecessors whose comic timing is good enough for the former POTUS to take on the road.

Still, it was good to see Joe Biden laughing at himself along with the insults hurled at others in the room and around the country.

The coronavirus pandemic nixed the previous two WH reporters’ dinners. Biden’s immediate predecessor in the White House labeled the media the “enemy of the people,” so there would be no way on God’s good Earth he would — or could — appear before those he despised. That means Biden was the first president to appear at this event in six years.

The event that began during the Calvin Coolidge administration has been set aside for Washington to take a light-hearted look at itself and to salute and honor the journalists who report the news to the world. Particularly poignant Saturday night was the tribute to journalists who have died covering the news, reminding us that even the messengers of world events can become victims of those events.

Some, moreover, have been held captive for years. Why? Because they reported the truth.

OK, I started this blog by saying that Joe Biden isn’t as clever with the quip as Barack Obama. I am going to assign him an “A” grade nonetheless for being a thick-skinned good sport during a troubled time. There is nothing wrong with that.

One thought on “WH reporters’ dinner is back”