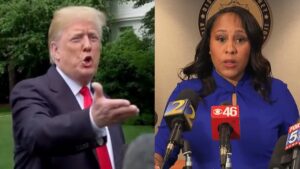 Fani Willis is emerging as potentially my newest political hero. She is the Fulton County (Ga.) district attorney who sought — and then received — permission to seat a special grand jury that is going to examine whether Donald J. Trump interfered with the 2020 presidential election.

Hmm. Let’s see. What do we have here?

We have a recorded conversation featuring Trump telling Georgia Secretary of State Brad Raffensberger to “find” 11,780 votes that can be credited to the ex-POTUS and possibly keep him in power. Oh, Joe Biden won Georgia’s electoral votes, but Trump harangued the chief elections officer in Georgia to find enough votes to swing it to Trump’s list of winning states.

Where I come from, that sounds for all the world like intimidation. You see, Trump told Raffensberger — a Republican who voted for Trump — to break the law. To his great credit, Raffensberger said no can do, Mr. President. Trump then threatened Raffensberger with prosecution if he didn’t comply with the Insurrectionist in Chief’s demand.

It’s all recorded, man. Raffensberger had the good sense to memorialize it for posterity. Is it legal for Trump to badger a state elections official in that manner? Is it moral? Does it make sense for Trump to, in effect, hand a prosecuting attorney — in this case, DA Willis — the proverbial smoking gun in a criminal investigation?

Willis sought the special grand jury that is going to look exclusively at the allegation of election interference. It didn’t take the state court system long to decide that a special panel is necessary to get to the truth behind Donald Trump’s effort to rig an election he said is … um, rigged.

I believe the prosecutor is onto something huge.