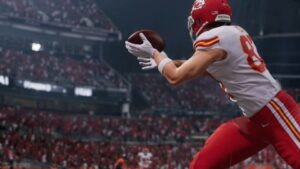 Whichever teams emerge next weekend from the NFL’s conference championship games will have a mighty steep hill to climb to match the excitement the football-watching public enjoyed this past weekend in the divisional playoff games.

This is my way of saying the Super Bowl, to be played two weeks later in Los Angeles, will have to go some to give us the same level of thrill.

Think of this: The Cincinnati Bengals beat the top seed in the AFC, the Tennessee Titans with a game-winning field goal; the San Francisco 49ers went to Green Bay to defeat the favored Packers after trailing the entire game — until the end; the LA Rams went to Tampa Bay and knocked the defending Super Bowl champs, the Buccaneers, with a game-ending field goal; then came the capper, with the Kansas City Chiefs defeating the Buffalo Bills in overtime with a touchdown pass in what many call the “greatest game in NFL history.”

The conference championships will have plenty of drama. My favorite story line belongs to the Bengals. They hadn’t won a road playoff game in the franchise’s history, yet they beat the Titans in Nashville. They haven’t played in a Super Bowl since 1989, when they lost a thriller to the 49ers.