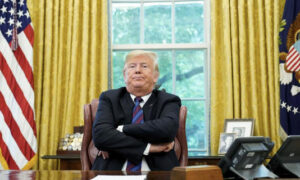 Steve Inskeep, National Public Radio’s main voice on all things political, deserves a high-five, an atta boy and a round of applause for the way he sought to press Donald J. Trump on The Big Lie he keeps alive.

NPR had secured a 15-minute interview with the former POTUS. Inskeep got about nine minutes’ worth of Q&A in before Trump decided he had heard enough questions about The Big Lie. So, he hung up on Inskeep.

The interview is a classic case of Trump continuing to lie, continuing to evade and continuing to produce zero evidence of what he has alleged: that the 2020 presidential election was “rigged” and “stolen” from him through “widespread voter fraud.”

Steve Inskeep sought to get Trump to explain himself, to offer any shred of evidence for the serious allegations he has leveled. Trump, to be candid, was hideous in his assertion of fraud.

My goodness, he couldn’t even stay on topic when responding to specific questions that Inskeep would toss at him.

‘He’s gone. OK’: Trump hangs up on NPR after host presses him on election lies (msn.com)

It was weird that Trump would agree to talk to NPR in the first place. I mean, he has labeled media that aren’t part of the propaganda wing that promotes the lies he puts forth as “the enemy of the people.” NPR is as down-the-middle as any media outlet one can name. I know what you might think, which is that conservatives consider NPR to be a liberal/progressive media organ. Bullsh**!

Trump demonstrated why he is so insufferable. Inskeep, meanwhile, demonstrated the qualities of solid journalism, which Donald Trump simply cannot tolerate.