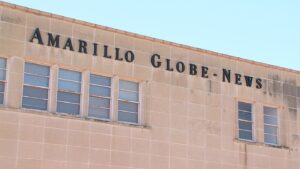 I lived in Amarillo, Texas, for 23 years and worked each day for nearly 18 of those years at the Globe-News, a once-good newspaper.

My daily journalism career came to an end in August 2012. The newspaper remains, but at this point it is a newspaper in name only. Yes, the paper still publishes seven days a week. It no longer publishes at the building where it operated for many decades. The printing press is in Lubbock and I don’t know how they handle business affairs, or circulation matters.

The newsroom? A formerly vibrant working environment has been all but eliminated; they’re down to maybe two or three reporters and some stringers (I guess).

The building is vacant. It is in a state of architectural decomposition. The corporate moguls vacated the building and moved what is left of the staff to an office in a downtown bank tower.

The once-proud structure is “tagged” with graffiti. They put out a fire inside the structure a few weeks ago.

The company that used to own the newspaper is still trying to sell the building, from what I hear. I do not know the state of that effort, such as whether it is being marketed aggressively. I don’t get back often to Amarillo, but my hunch is that it is just going to rot some more.

I want to lament the demise of that structure one more time.

The Globe-News used to aspire to becoming a great newspaper. It didn’t quite get there. We did a good job of reporting the news during my time there. I tried to lend some leadership via the opinion pages during my tenure as editor of those pages.

That was then. The here and now suggests to me that the newspaper itself is fading into the community’s past. It saddens me greatly.

3 thoughts on “What will happen to this site?”