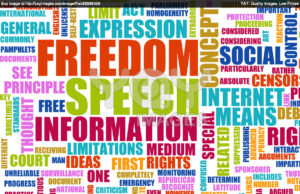 Our nation’s founders were wise men in that they felt it necessary to protect all forms of political speech, no matter how repulsive it might be to many of our ears.

But … damn! At times I wish we could outlaw demagoguery. I know we cannot. We dare not tinker with the First Amendment’s free speech clause, which I happen to value beyond all measure.

When I hear things, though, from those who claim to be speaking the “truth,” I cringe. Then I grit my teeth. I also might mutter a bad word or three.

I had an exchange recently with a critic of this blog. He continues to perpetuate the notion that political progressives endorse the notion of rioters committing acts of vandalism, not to mention inflicting bodily harm on police officers or those with whom they have disagreements.

I have sought to dispel that notion. Yes, I have heard some congressional progressive, speaking in the wake of police shootings of African Americans and the like, urge protesters to “take to the streets.” Is that an endorsement of violence, of vandalism, of committing felony crimes against human beings? No. It isn’t!

And yes, there are those on the left who resort to demagoguery at times. The current crop of demagogues features those on the right. They say that President Biden favors “open borders”; they contend that the president wants to “take your guns away”; they accuse liberals of “favoring” abortion in all cases.

This is the crap that sends me into orbit.

Do we ban those who promote such idiocy? No, we cannot do that. That Constitution of ours, drafted by those smart guys in the late 18th century, tells us we all have the right to utter nonsensical rhetoric. I accept that.

I just cannot accept what some Americans say while under constitutional protection.