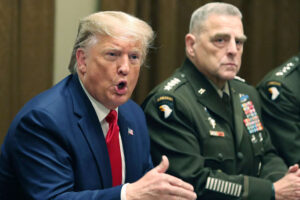 The older I get the harder it becomes for me to sit down with a book and read it from front to back non-stop. Yep, even those so-called page-turners.

That all said and understood (I presume), I ordered a new non-fiction piece of work that well could go down as a landmark historical document of the final days of the 45th president’s term in office. It’s titled “Peril,” co-written by a walking-talking journalistic legend, Bob Woodward, and an up-and-comer, Robert Costa.

They are telling the world a story about the imminent peril that the 45th POTUS put the nation through while he continued to fight the results of the 2020 presidential election, which Joe Biden won fairly, squarely, legally and any other way you want to describe it.

Joint Chiefs of Staff Chairman Gen. Mark Milley called his Chinese counterpart to assure him he would be alerted ahead of a possible attack by the United States, Woodward and Costa tell us. They also related how then-Vice President Mike Pence talked with one of his VP predecessors, fellow Indianan Dan Quayle, about how he (Pence) could overturn the results of the election; Quayle told Pence to “give it up,” that he had no choice but to obey the Constitution and certify the results on Jan. 6.

I want to know more. I trust Woodward implicitly to get it right. I mean, he and his former Washington Post college Carl Bernstein wrote the book on political investigative journalism (no pun intended) during the Watergate crisis of the 1970s.

This is good stuff. I might be too old to read a good book in one sitting. I am damn sure not too old to learn more about how vulnerable our democratic institutions can become when we put a charlatan in charge of our nation’s executive government branch.