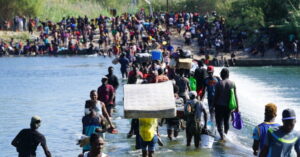 President Biden no doubt knew he was jumping into a briar patch when he decided to seek the presidency in 2020.

Now he’s getting pilloried for something he couldn’t possibly control, which is the flood of refugees from Haiti; they are congregating on the U.S. border near Del Rio, Texas. The United States is sending thousands of them back to Haiti.

Wait, though, for the criticism that is going to come flowing toward the Biden administration.

Why didn’t they anticipate this flood of immigrants? Why are they being mistreated by border and immigration officers? How can they allow this monumental tragedy unfold?

I will continue to stand with the president as he seeks to deal with this newest crisis on our border.

Haitians are fleeing their country, which was torn apart with the assassination of its president. Then came that killer earthquake. I guess one would want out of a nation with no stable government, let alone a stable infrastructure to withstand Earth’s awesome power.

“We are very concerned that Haitians who are taking this irregular migration path are receiving false information that the border is open or the temporary protected status is available,” Homeland Security Secretary Alejandro Mayorkas said. “I want to make sure that it is known that this is not the way to come to the United States.”

President Biden is getting pilloried, pounded and pummeled these days for the crisis that erupted virtually without warning. How in the world does one prepare for such a monstrous development?

Joe Biden sought the presidency twice before finally winning the office in 2020. He has been involved with politics long enough — seemingly since The Flood — to know that the realm is fraught with peril. I spent the previous four years lamenting the fecklessness of a president who didn’t listen to any of the advisers with whom he surrounded himself. He sought to live up to the mindless boast that “I, alone can fix” whatever problems arose.

President Biden isn’t wired that way. He has surrounded himself with critical thinkers and individuals seasoned in the nuanced world of international relations.

They all have a huge problem on their hands at the moment. They need to find a solution quickly. If they fail, then they will deserve the pounding they are sure to receive.

One thought on “Biden gets blame for this, too?”