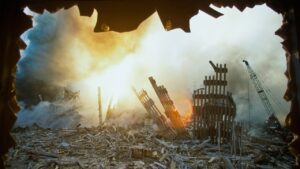 The commemorations we have witnessed today as the nation marks the 20th year since the 9/11 attacks have taken us — in my mind at least — on a dual-track remembrance.

I am reminded of how unified we were immediately after the attacks. President Bush called us to arms to fight the terrorist network that launched the attack. We stood behind the wartime president … for a time.

Then he took us into Iraq. The Iraq War was launched on false pretenses. We invaded a sovereign nation, removed a hated dictator and then got bogged down in another conflict with no clear motive for engaging the Iraqis in the first place.

We took our eyes off the key enemy: the Afghan terrorists.

President Bush infamously said at one point during his time in office he didn’t think much about Osama bin Laden. His successor, President Obama, made it the nation’s mission to bring justice to the mass murderer. Our special forces did so in May 2011.

Yet the war in Afghanistan dragged on.

Which brings me to the second track. President Biden ended that war. I am more glad today than ever that he acted when he did. It is true the withdrawal could have been executed more cleanly. But our troops are off the battlefield.

We have removed the world of thousands of terrorists. No, they aren’t exterminated. Others have stepped up to replace them. Indeed, the Afghan War had turned into a never-ending struggle against an enemy that cannot possibly be wiped off the face of the planet.

However, we retain — throughout unsurpassed military and intelligence capability — the ability to search out and destroy anyone who intends to do us harm the way Osama bin Laden did on 9/11.

May always remember the attacks of that horrific day. May we also always remain alert to the danger that lurks.

However, let us also avoid the kind of quagmire — and that’s what it became in Afghanistan — that always exacts too heavy a price.