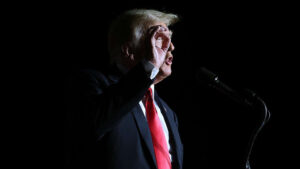 The former Liar in Chief said this to his minions at Fox News this week: “I think you’re going to be happy.”

About what? About his decision on whether he intends to run for POTUS in 2024. The one-time Numbskull in Chief keeps dropping hints that he intends to seek the office next time out.

Would he make me “happy” if he decides to keep his overfed backside off the campaign trail? Uhh, yeah. Do ya think?

I would be decidedly unhappy if he decides to make another run for it, even though I am going to stick to my previously stated view that he won’t do it.

I have a member of my family who believes the former Imbecile in Chief should run so that Democrats and perhaps even some actual Republicans can replay video of him exhorting the insurrectionists to storm the Capitol Building on 1/6. That would doom the ex-Nitwit in Chief’s chances, according to this family member.

Whatever. I am waiting with bated breath for the ex-Moron in Chief to “make me happy.”