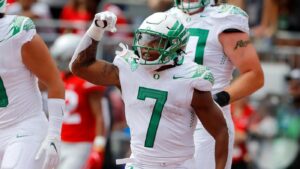 I do enjoy the occasional welcome diversion from the issues of the day. One of them came across my sight this afternoon.

The Oregon Ducks played the Ohio State Buckeyes in a college football game in Columbus, Ohio. The Buckeyes were ranked No. 3 in the nation; the Ducks came in as the No. 12-ranked outfit.

The Ducks won the game in the stadium they call “The Shoe.” It was filled with 100,000 or so screaming fans. Dare I say they weren’t wearing masks? Oh, what the hey … I’ll save that one for another time.

I am an Oregon native. I didn’t attend the U of O, but I cheer for them when they show up on national TV. I did so today, alarming Toby the Puppy when it appeared near the end of the game the Ducks would win.

We all need to have our attention yanked away from those things that dominate the TV airwaves, or the printed pages of newspapers, or our computer screens.

My wife and I rolled out early this morning to attend a 9/11 commemoration at a fire station in Princeton, Texas, where we now live. It was a wonderful event. They played “Taps.” They hoisted the flag and then lowered it to half-staff. The deputy fire chief delivered some heartfelt remarks about the heroism we all witnessed 20 years ago today when the terrorists attacked us.

Then we went about our day.

I took some time away from scouring news sites for matters on which to comment. I just cheered for my favorite college football team.

Dang! It was great to see the Oregon Ducks win a huge football game in front of the whole nation.