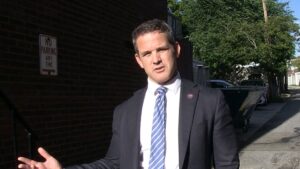 I once asked — during one of the crises involving the 45th POTUS — whether there were any Republican heroes among members of the GOP congressional caucus.

Two of them have stepped up in the months since that individual left office.

One of them is U.S. Rep. Liz Cheney of Wyoming, about whom I have written already on this blog. The other is Illinois U.S. Rep. Adam Kinzinger.

Kinzinger is standing tall and firm in the effort to explore and examine the Jan. 6 insurrection that the 45th POTUS incited with his Big Lie comments on the alleged theft of the 2020 presidential election.

The young congressman wants to know why his fellow Republicans wouldn’t want to look into the cause of the riot if they believe that Antifa, or Black Lives Matter or some other left-wing outfit provoked it. Nor does he understand why they won’t look into the cause of an event that could have put every member of Congress in dire danger of being harmed … or worse.

Kinzinger does pose the question that has piqued many of Americans’ curiosity. He wonders if GOP resistance to a thorough exploration of the insurrection would expose potential Republican complicity in the event.

Because he and Rep. Cheney are searching for the truth behind the assault on our democracy, they are being vilified by the cult followers who refuse to accept the legitimacy of the free, fair and legal election.

The challenges they face quite possibly could tell us plenty about the Republican Party to which they both remain faithful. Except that the party now has been hijacked by the con man who masqueraded as POTUS for four years.

Political heroes who seek to defend the Constitution and the democratic process do not deserve to be treated as pariahs. They should be honored, not pilloried.