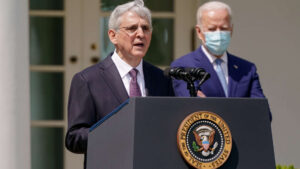 U.S. Attorney General Merrick Garland has laid down the law to those who seek to terrorize Americans from within our borders.

The Department of Justice is coming after them.

Indeed, Garland has experience dealing with — and bringing justice to — domestic terrorists. It was 26 years ago today that a home-grown, corn-fed terrorist detonated a bomb in front of the Alfred Murrah Federal Building in Oklahoma City. The blast killed 168 people, including 19 children in the worst act of domestic terrorism in U.S. history.

Police arrested the bomber soon afterward. Garland was a young federal prosecutor who led the charge in bringing the madman to justice. He succeeded and the killer was executed.

The New York Times reported: “Although many years have passed, the terror perpetrated by people like Timothy McVeigh is still with us,” Mr. Garland said. “The Department of Justice is pouring its resources into stopping domestic violent extremists before they can attack, prosecuting those who do, and battling the spread of the kind of hate that leads to tragedies like the one we mark here today.”

Make no mistake, domestic terror is alive and festering. FBI Director Christopher Wray said in 2019 that domestic terrorism presents the single greatest threat to Americans, even more than foreign terrorists.

Indeed, we saw them storm the Capitol Building on Jan. 6 and we have heard members of Congress actually endorse the myriad phony conspiracy theories espoused by domestic terrorists. Imagine that … if you can.

It is with that backdrop that I welcome AG Garland’s renewed commitment to fighting the enemy from within.