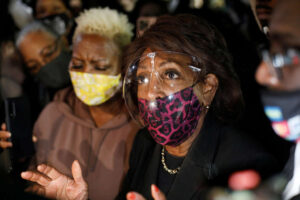 Just as U.S. Rep. Maxine Waters correctly admonished her House colleague Jim Jordan to “shut your mouth,” she ought to heed her own advice.

Waters, a California Democrat, decided to weigh in on a possible consequence of the trial of a former Minneapolis cop, Derek Chauvin, who is on trial for murder in the death of George Floyd in that infamous arrest that cost Floyd his life.

Get more confrontational? What in the world is Rep. Waters advocating? Violence? Good fu**ing grief.

Her remarks drew a sharp rebuke from the judge presiding over the Chauvin trial, suggesting her comments could end up as fodder for an appeal by Chauvin’s defense counsel if the ex-cop gets convicted of murder or manslaughter.

Maxine Waters long has been seen as a lightning rod for those on the left and the right. She tends to get in people’s faces, saying whatever she damn well feels like saying.

Look, I endorsed her comments about Jordan, who hectored and badgered Dr. Anthony Fauci about the pandemic. Jordan needed to be slapped down.

However, Rep. Waters stepped way beyond her sphere of influence in calling for “more confrontation” if a criminal defendant gets acquitted. The jury system well could produce an unsatisfactory verdict in this case. Let’s allow the jurors to do their civic duty to the best of their ability.

As for Rep. Waters, she needs to shut her mouth.

2 thoughts on “Waters needs to shut her mouth!”