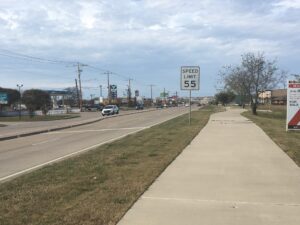 Princeton City Councilman Mike Robertson wants to slow ‘em down along U.S. Highway 380. He professes patience as he works with his City Council colleagues and the Texas Department of Transportation.

However, given his own experience as the victim of a serious auto accident while he was living in Irving, it appears that his patience might have its limits.

Robertson is proposing to TxDOT to slow traffic to 40 mph along the entire highway thoroughfare as it bisects the city. The speed limits now vary, from 55 to 45 mph. Robertson says that’s too fast, given the incredible growth and the associated increase in traffic volume.

“When the speed limit is 60,” he said, “you have little chance of getting through a wreck without injury.”

TxDOT must perform traffic studies before it decides whether to adjust the speed limits along any major thoroughfare. The city already has installed a new traffic signal at the intersection of 380 and Princeton Meadows near the city’s western boundary. Another signal is planned for the site next to the new municipal complex under construction closer to the eastern boundary along 380.

Once that project is complete, Robertson said, TxDOT will be able to conduct the requisite traffic studies to help the agency make its speed determination.

Robertson said he doesn’t drive much these days, as he works from home running a continuing education program for chiropractors; he no longer is a practicing chiropractor.

Help is on the way, though, in the form of new thoroughfare construction planned for Princeton and for communities along the Highway 380 corridor. Robertson noted that TxDOT wants to build a 380 bypass that will divert through traffic to a thoroughfare north of the current highway. “The bypass eventually will relieve a lot of the traffic congestion,” Robertson said.

Moreover, the city plans to turn Myrick Avenue south of the highway into a second major east-west right-of-way.

All of that will take time. Perhaps lots of time. It’s the period between now and then that concerns Robertson, which is why he wants TxDOT to make a decision sooner rather than later on the speed limit along Highway 380. “We might get to drop the speed,” he said, “but maybe not as much as I would like.”

Traffic remains a concern along U.S. 380 through many North and Northeast Texas communities. Farmersville, for example, recently received a request for a zone change to build an apartment complex near the U.S. 380 corridor. The Farmersville City Council denied the zone change request sought by the apartment developer, citing the “density” of the housing and the potential traffic congestion that it could produce along the rapidly developing thoroughfare.

Indeed, Collin College recently opened its Farmersville campus, which was one of the possible hazards cited by the council in denying the zone change request.

Princeton, meanwhile, continues to grow at a rapid pace. Its main thoroughfare, U.S. 380, continues to have varying speed limits along its route through the city. City Councilman Robertson intends to keep up the push to slow that traffic down to what he believes is a more reasonable and consistent speed.

NOTE: This blog post was published originally on KETR.org.