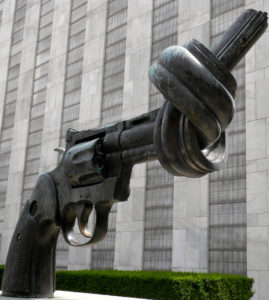 Believe this or not, but it appears that President Biden is taking the path of least resistance as he issues executive orders aimed at reducing gun violence in this country.

Biden signed off on orders today that ban what they call “ghost guns” and employ stricter background checks for those wishing to purchase a firearm.

What are ghost guns? Take a look at this link:

Ghost guns: Here’s what they are – CNNPolitics

The least resistance part? The gun lobby already detests Biden. The lobbyists detest even more any effort to enact legislative remedies to gun violence, contending that the Second Amendment is sacrosanct and cannot be monkeyed with in any form or fashion.

Indeed, nimrods such as 13th Texas Congressional District Rep. Ronny Jackson, tweet things like this: It’s your Constitutional RIGHT to own a firearm! We can’t allow Democrats to take that away! No one is talking about taking guns away from those who won’t use ’em to kill other human beings.

Meanwhile, general public opinion happens to be on the president’s side. Most Americans favor some stricter rules while also supporting the Constitution’s Second Amendment.

Is this executive action legal? My gut tells me that a president with extensive legislative and federal executive government experience already has done his homework. He knows the lines he cannot cross. President Biden isn’t about to be derailed because he made a mistake in performing his duties to protect us.

3 thoughts on “POTUS cuts his losses”