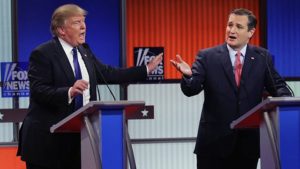 Ted Cruz takes the grand prize as the “sniveling coward” of this still young year.

I kind of like the term “sniveling.” It’s so, um, descriptive. You can draw a mental picture of someone cowering in a corner, sobbing while crouched in some sort of fetal position.

It’s an epithet that the Texas U.S. senator threw at a fellow Republican presidential candidate in 2016. Yep, that would be Donald John Trump, the guy who eventually won the presidency that year. You recall the moment, yes? Trump tweeted an unflattering picture of Heidi Cruz, Ted’s wife. Ted went after Trump with ferocity, calling him a “pathological liar,” a guy with “no morals,” and yes, he called him a “sniveling coward.”

Trump is all of that. So, too, is Ted Cruz … I mean the sniveling coward part.

You see, after Trump got elected Cruz began sucking up to The Donald. They became best friends. Cruz became afraid of the damage Trump might cause were he to remain committed to his earlier view of Trump’s morals, his lying and his lack of courage.

He cowered in the face of potential payback. Thus, he became a “sniveling coward.”

I suppose you could say he burnished his “sniveling coward” credentials by jetting off to Cancun while Texans shivered in the dark during that horrible winter storm. Oh, and get this: Cruz then decided this weekend at the Conservative Political Action Conference to mock Alexandria Ocasio-Cortez, the New York progressive member of Congress, who came to Texas and raised $5 million in storm relief … while Cruz was hightailing it to the beach in sunny, balmy Mexico.

All of these examples I have cited offer plenty of evidence to suggest that Ted Cruz is very much the “sniveling coward” he once said of an ex-president to whom he now professes blind fealty.

Cruz makes me want to puke.

3 thoughts on “Ted Cruz: ‘sniveling coward’ of the year”