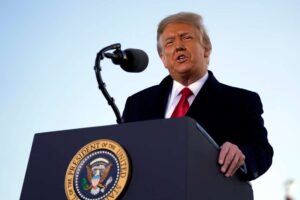 The ending didn’t produce a result that I wanted. Fifty-seven U.S. senators voted to convict Donald Trump of inciting an insurrection against the government of this country; 43 of them voted “not guilty.”

But … the U.S. Constitution requires 10 more “guilty” votes to hold the ex-president accountable for what I know he did on Jan. 6, which was to whip an angry crowd into a frenzy, to march on Capitol Hill and to subvert Congress’s effort to certify a duly conducted free and fair election for president.

I acknowledge that the result is final. Most of our senators put country ahead of party or ahead of a man. Seven Republicans mustered up the guts to do the right thing.

There will be a lot of hand-wringing and gnashing of teeth over the post-vote speech delivered by Senate GOP Leader Mitch McConnell, which was riveting in its own right. McConnell had just minutes before cast a not guilty vote for Donald Trump. Then he stood before the nation and said, in effect, that Trump did all the things that the impeachment article alleged he did. He incited the crowd, which acted on the then-president’s own words.

McConnell also said that Trump didn’t get away with anything, that he will be held accountable later. Hmm.

So, we can move on to more pressing matters that are relevant to the here and now. President Biden is at work seeking to press Congress for COVID relief; we need help to jump-start the economy; we have environmental concerns that pose an existential threat to our national security; we have racial unrest still boiling in communities across the land.

I am ready to put this sorry episode aside. However, I won’t forget it.

Nor will I ever forgive Texas’s two senators — Ted Cruz and John Cornyn — for refusing to recognize what we all witnessed in real time, that Donald John Trump interfered in a free and fair election.