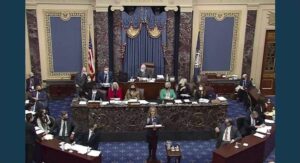 The U.S. Senate could have convicted Donald John Trump of inciting an insurrection. It didn’t, falling 10 guilty votes short of the constitutional requirement for conviction.

Does this vote today now signal a revived Donald Trump, the guy who lost re-election to President Joe Biden? I am not going to endorse that scenario.

I am going to hold onto the belief that we have witnessed in real time the demise of a disgraceful era in American political history.

Trump won an acquittal in name only. We watched 57 senators vote to convict him, with 43 of them voting not guilty. The Constitution requires 67 conviction votes to make it official. Let’s face reality. Most of the Senate convicted him, by a healthy margin.

How does Trump now parlay that knowledge into a run for the presidency once again in 2024? My view is that he cannot. Trump has been handed his genitals on a plate by a Senate vote that officially fell short of conviction, but which has delivered an important symbolic conviction that will stain him forever.

Trump incited the insurrection that damn near brought our democratic process to a halt. The riot he provoked could have killed many more people than those who did die. It could have brought harm to Vice President Mike Pence, to House Speaker Nancy Pelosi or any other political leader who could have been trampled by the rampaging mob. Thank goodness it didn’t.

I never will accept the Senate’s final verdict as an “acquittal” in the true sense of the term. Trump, though, is going to trumpet the verdict as a triumph. It was nothing of the sort.

That all stated, I now intend to give Donald Trump’s future political adventures all the attention they deserve.

Don’t misunderstand me. I will comment on the damage he has done. I will offer perspective on the work that President Biden and others are doing to repair that damage. Be sure, too, that we all should keep our eyes and ears open to the investigations under way in places like New York and Georgia, where local prosecutors are examining whether to file criminal charges against the ex-president.

Donald Trump’s political future? I believe he is a goner.

One thought on “End of a disgraceful era”