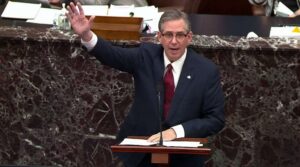 Our latest national nightmare is winding its way to a conclusion.

I’ll toss a single bouquet at Donald Trump’s legal team. It took next to no time to finish its job in defending their client in the U.S. Senate trial against charges that he incited an insurrection against the U.S. government.

I don’t believe Trump’s team made the case. But that’s just me. He did what the House of Representatives alleged he did in its impeachment article. The remaining task will be for the Senate to cast its vote.

I do not expect a conviction. Trump will walk away. The Constitution sets a high bar for conviction, two-thirds of the senators have to agree; they won’t get there.

What now? Well, it is time to move on. It is not time to forget. Nor is it time to shove aside what happened on the Sixth of January. What happened was an egregious attack on our system of government. It was an attack on our democratic process.

The terrorists who stormed Capitol Hill intended to stop Congress from fulfilling its constitutional duty of certifying the results of an election that Donald Trump lost. He still hasn’t accepted his defeat, that Joe Biden is now president.

The Senate very soon can get busy with other pressing matters. COVID relief needs approval. There needs to be attention paid to economic revival. President Biden can now step out of the shadows cast by the impeachment trial and insert his own efforts at fixing what ails the nation.

I am fine with that. I only wish we could anticipate a more just outcome from the Senate trial. We won’t get it.

Instead, we are going to witness a majority of Republican senators continue to lick the boots of a cult figure. There might be a few crossovers, just not enough of them.

If I was King of the World, I would suggest that the Republican Party needs to assess whether it believes that “character matters,” and that it hues to the tenets of inclusion that made it a great political party. The Party of Trump represents none of it.

One thought on “Let’s move on … but do not forget!”