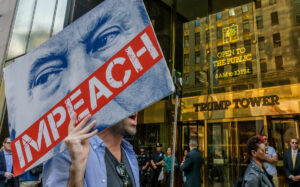 Unless hell freezes over — and that seems remotely possible as North Texas shivers from an Arctic blast — we are going to witness a U.S. Senate trial acquittal of Donald John Trump.

It’s good, though, to think of what an impeachment really means and whether it really still matters.

I am willing to argue that it matters a lot. It matters even when the politics of the moment dictates a preordained outcome that doesn’t result in what ought to be a sure conviction and some form of punishment for the president who stood trial.

Indeed, I will maintain for the rest of my life that Donald Trump committed a high crime against the government by inciting that riot on Jan. 6 that damn near wiped out our democratic process. The politics of this moment, though, precluded a conviction.

Why? Because a 50-50 Senate split required 17 Republicans to join their Democratic colleagues in convicting Trump. You can bet your last greenback that Democrats would stand together; the GOP caucus is more split, with some of them voting with the Dems. But not enough.

Impeachment, though, remains a viable option for the legislative branch to act against a rogue president, who runs the executive branch of government. Make no mistake at all: Donald Trump ran rogue, roughshod over the government.

House Intelligence Committee Chairman Adam Schiff, who led the first House impeachment trial team in early 2020, predicted that he would run wild if he were acquitted. He was and he did.

Political tides do ebb and flow. Their influences are subject to change. The tides of the moment just wouldn’t allow GOP senators to do the right thing. Trump’s hold on the Republican Party remains formidable, I suppose. So we have to live with an outcome that many of us detest.

None of this detracts from the value of impeaching a president who commits a high crime … and oh brother, the 45th president of the U.S. surely deserves to be convicted.