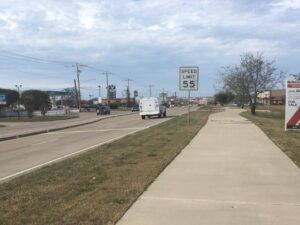 Princeton City Councilman Mike Robertson is a man after my own heart … speedwise.

He wants to slow motorists down as they travel along U.S. Highway 380, at least while they’re traveling within the city limits.

Robertson is pitching a notion to slow motorists down to 40 mph within the city limits. Currently, the limits vary, from 45, to 50 to 60 mph.

The Princeton Herald is covering this story and it quoted Robertson, thusly: “It doesn’t make any sense to keep such a high speed limit through town.” Yeah. Do you think?

Indeed, U.S. 380 often is clogged with stop-and-go traffic during much of the day. It’s a busy thoroughfare that coarses through the fast-growing community.

The city, though, has limited options. It cannot act on its own because U.S. 380 is maintained by the Texas Department of Transportation, according to the Princeton Herald, which reported: “The city does not have the authority to reduce the speed, however, it has taken measures to slow down traffic within city limits with one new stoplight and they are working on installing a second light.”

Indeed, the addition of signals comports with what City Manager Derek Borg told me about a year ago as we discussed the traffic issues along U.S. 380. Borg is acutely aware of the traffic snarls that occur along the highway and thinks the increased traffic signals, among other things, will help motorists seeking to enter the highway from side streets.

I believe Councilman Robertson is onto something. In fact, when I see the Herald each week, I look at the police blotter section on Page 2 … and what do I see? I often see several instances of “major auto accidents” along U.S. 380. The blotter entry doesn’t designate whether they are speed-related. My strong hunch is that, well, many of them are related to motorists traveling too rapidly along a busy thoroughfare choked with other motor vehicles.

The Herald reports that TxDOT is “receptive” to the idea of slowing vehicles down, but notes any action might require some time for a change to be made official.

Whatever you do, don’t drag your feet, TxDOT. I am one motorist and Princeton resident who backs a councilman’s request to slow the traffic down.