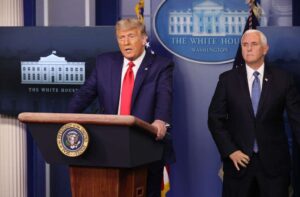 I am going to make a suggestion that might surprise readers of this blog, which is that I believe Donald Trump ought to try to pardon himself for crimes he might have committed.

Would such a pardon be legal? Is it constitutional? Who in the name of juris prudence actually knows for certain? Hey, so go ahead, Mr. President, give it a try.

A presidential self-pardon could do a couple of things to Trump’s political future that he wouldn’t like. It would brand him forever as someone who is likely guilty of whatever crime he might  have committed. The acceptance of a pardon is an implied admission of guilt, right? Well, that’s how I see it … along with many legal and constitutional scholars.

“If the president has designs on running again for president, this would certainly imperil that, and I would think encourage other justice departments to really look at what he had done while in office if he is tacitly admitting he needed to be pardoned for stuff,” Cupp said.

Therefore, if Trump is thinking about running for president in 2024, he will have to explain to Americans how someone who in effect admits to commit crimes can run for the office he lost in 2020? Oh, wait! I forgot that he wouldn’t have to persuade gullible GOP primary voters who think he’s the bee’s knees already, even though he has trashed the presidency, lied through his teeth repeatedly to everyone and made a mockery of every norm associated with the nation’s highest office.

The rest of us? Well, that’s another issue.

I don’t think it’s going to get that far, to be honest. I have serious doubts that Trump is going to run again for POTUS, but that’s just me, you know?

If a self-pardon is ruled to be illegal or unconstitutional were he to actually do it, Trump would face being called a dimwitted dipsh** who thought he could pull a fast one on the federal judiciary. But, hey, I already think that of him as it stands right now. Maybe others might catch on, too.

So, go ahead and give it a shot, Donald. Let’s see what this would do to your “brand.”

5 thoughts on “Go ahead, Mr. POTUS … pardon yourself”