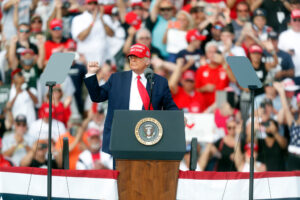 Donald J. Trump is going out in a blizzard of incoherence, which to my memory reminds me of how he entered the presidency.

He was willfully ignorant of what it took to take the reins of government. He never learned a thing. Now he’s exiting the White House on Jan. 20 while offering a mysterious string of incoherent rants.

Oh, but wait. Now comes Trump saying that he would leave the White House if Biden can prove that the 80 million-plus votes he has racked up came about legitimately. That they were all legally cast votes.

Huh? Hey, Donald, I have news for you. The states that have certified the results have declared they all are legal, free and fair votes. They say without hesitation that there is no “widespread” voter fraud. There isn’t even any minuscule voter fraud, they say. These are election professionals who know what they are doing, unlike the lame-duck make-believe president who has been in over his head from the moment he took the oath in January 2017.

Donald Trump is leaving the White House no later than Jan. 20. I am rolling around in my head the idea that he might depart before then, forgoing the niceties associated with attending his successor’s inaugural. I mean, if he’s going to refuse to acknowledge that President-elect Biden, what’s the point of him and Melania even bothering to show up?

I only can imaging what might happen as he and the first lady step aboard Marine One for the flight away from the Capitol. It might get real ugly.

Chaos reigns supreme at the end of the Trump Era, just as reigned at its beginning. Who knew?

One thought on “Trump goes out as he came in: amid chaos”