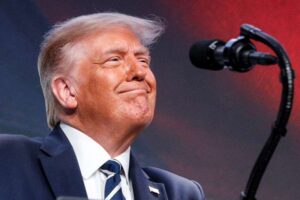 Let’s try to unpack this bit of prose.

New York Times reporter Michael Schmidt has just published a book, “Donald Trump v. The United States.” He writes in the book that on Nov. 16, 2019, Trump was taken to Walter Reed Military Hospital for an unscheduled visit. The White House informed Vice President Pence to stand by in case the president would be incapacitated by heavy sedation.

Schmidt writes that Pence never assumed the presidency in a temporary fashion. He writes only that Trump was treated for a “mystery” ailment.

What, then, is up with this Twitter message from Trump. He denied in a tweet that he suffered any “mini-strokes” or a “stroke.”

Hey, wait a second! No one reported a thing about mini-strokes! Donald Trump today broke that bit of news all by himself, without prompting, without any reason on Earth to issue a denial!

Has the president just opened the door to open speculation about his physical health?