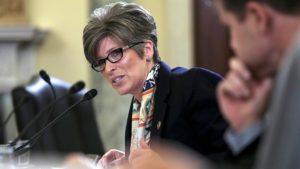 Can it be that Joni Ernst is really and truly that much of a nitwit?

The Iowa Republican U.S. senator has said that the nation’s death count from the coronavirus pandemic might be exaggerated because doctors and other medical workers get greater reimbursements related to COVID deaths.

The Centers for Disease Control and Prevention puts the death count at 184,000 … and rising.

Sen. Ernst is offering yet another GOP-hatched conspiracy theory that flies in the face in the counter evidence that suggests that the death count might be even greater than what the CDC is reporting.

Why is that? Because there might be a hidden number of deaths that weren’t diagnosed as being related to the virus. That number could be thousands more than what CDC is telling us.

Is this a function of a lack of tests to determine infection rates? Might it be that poor Americans who don’t have access to proper medical treatment are succumbing to the disease without ever knowing they were infected in the first place?

I happen to one American who is more inclined to believe in the undercounted notion than the one that Ernst is pushing.