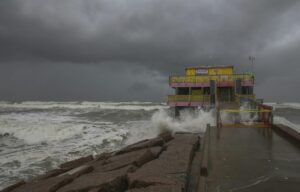 I never have been one to dismiss out of hand the power of prayer.

I pray all the time. I did so, along with millions of other Americans, that Hurricane Laura would spare our friends living in the Golden Triangle region in the southeast corner of Texas.

Guess what happened? Laura stormed ashore in Cameron, La., a good bit east of the Golden Triangle. I don’t wish bad things to happen to anyone caught in the middle of nature’s fury, and I have continued to offer prayer to those who were hammered by the Category 4 force of the killer storm.

The National Weather Service issued a most unusual warning prior to Laura reaching shore. The NWS said the storm would produce an “unsurvivable” surge of Gulf of Mexico water. Unsurvivable? Yep, that’s what they said.

Then I heard this morning that the storm surge wasn’t as monstrous as the NWS projected. Did the prayer work for those good folks, too? Well, suffice to say that the answer is one that cannot withstand empirical examination. You either believe it did … or you don’t. I choose to believe in the power of prayer.

Hey, I’ll take all the credit I deserve for that one. So should the rest of us. To be sure, there have been at least two fatalities reported in the past few hours, so the storm has inflicted terrible misery on the families and friends of at least two individuals.

I also should point out that the NWS wasted no time in retiring the name “Laura” from its roster of future storm names. The storm was strong and fearsome enough to join the ranks of Katrina, Rita, Ike, Maria and Harvey — among others — in the pantheon of retired storm names we’ll never see again during hurricane season.

Speaking on behalf of our friends in the Golden Triangle, I want to extend a heartfelt, sincere and profoundly authentic sigh of relief that they averted the worst of what Mother Nature can dish out.