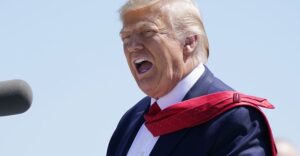 Republican National Convention speakers have been criticizing their Democratic convention colleagues for what they have called an egregious error of omission.

Democrats, they say, should have talked about the violence that has erupted in many of our cities as Americans have protested police conduct in the wake of the deaths of African-Americans.

That’s a fair point. The DNC should have spoken to that issue at their virtual convention a week ago.

However, let’s not let the RNC escape similar critiques of its message. The GOP that has nominated Donald Trump and Mike Pence for a second term has yet to address the terrible heartache, misery and death associated with the COVID crisis. Yes, they have acknowledged the existence of the crisis. They have said nothing about how it has affected the loved ones of those who have died or the economic collapse that has occurred as a result of the pandemic.

Therein, I submit, exists the error of omission on the Republicans’ part in this political game of Can You Top This?

Republicans continue to portray Donald Trump’s initial pandemic response as courageous, forceful, bold, proactive … all that happy horse dookey. It was none of that. They know it as well as you and I know it. Do not expect them to come clean by the time the convention wraps up.

I just want Democratic nominees Joe Biden and Kamala Harris to remind voters of the start choice awaiting them. Do they want more of the same chaotic incompetence or a return to compassion, empathy and actual presidential leadership?

You know already where I stand.