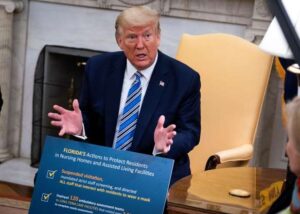 I never thought Donald Trump could out-do himself while he was being impeached by the House of Representatives.

He made big news daily with his idiotic pronouncements and allegations against House Democrats, special counsel Robert Mueller and the media.

However, by golly, the Dipsh** in Chief has done it. He has buried us under an avalanche of even weirder statements.

He has accused President Barack Obama of committing an illegal act. He wants the former president to testify before Congress about allegations that Trump hasn’t specified.

The president’s former pandemic guru has testified that Trump sought to promote an unproven drug as a “miracle” cure. Trump said he has never met Dr. Richard Bright and doesn’t “want to meet him.”

Dr. Anthony Fauci, the nation’s leading infectious disease expert, told Congress that it would be unwise to rush to reopen schools; Trump said Fauci gave an “unacceptable answer” to that matter.

Trump continues to slander his opponents daily. For example, he has accused MSNBC commentator Joe Scarborough — a former Republican congressman who’s turned into a Trump critic — of committing murder.

I cannot keep up with this madness. Donald Trump continues to dig himself more deeply into a hole he began digging the moment he announced his presidential campaign in the summer of 2015.

My pandemic fatigue is reaching, dare I say it, epidemic proportion