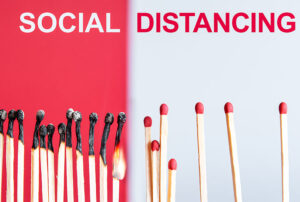 Social distancing is the weapon of necessity in this fight we are waging against the coronavirus pandemic.

Get a load of this bit of news out of Amarillo: Hundreds of meatpacking plant employees aren’t showing any symptoms of the COVID-19 virus — but are testing positive anyway for the viral infection.

Which makes social distancing and the wearing of masks so very imperative, according to Amarillo Mayor Ginger Nelson.

“We are encountering people who are asymptomatic,” said Mayor Nelson in remarks to KAMR/KCIT-TV in Amarillo. “They don’t know they’re sick, but they have the virus and they’re at the grocery store, you’re encountering them, and that’s why it’s so important to wear a mask. You could be that person.”

And yet we keep hearing from fools such as, oh, the president of the United States who tell us how vital it is to reopen the country, to get the economy jump started. Donald Trump cares less about the health of Americans than he does about the state of the economy and whether its current crisis bodes ill for his re-election chances.

Moreover, he is enlisting many of his gubernatorial allies — such as Texas Gov. Greg Abbott — in pushing forward possibly too quickly.

The Tyson Foods plant in Amarillo is a huge employer. More than 3,500 employees got tested for the virus, many of whom tested positive. I am forced to ask: Is it worth exposing those employees to serious illness or even death? I would say with emphasis: Hell no!