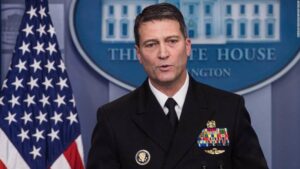 I am about to stick my nose into a political race that, for all intents, is no longer my business, given that I do not live in that congressional district, but here goes anyway.

The carpetbagger to whom I refer is Dr. Ronny Jackson, the former physician to Presidents Barack Obama and Donald Trump.

He claims a West Texas heritage. He was born in Levelland, just west of Lubbock. Levelland also happens to sit within the 11th Congressional District. Jackson, a retired Navy admiral, has never lived within the 13th Congressional District, which stretches from the Texas Panhandle to the outskirts of the Dallas/Fort Worth Metroplex. He doesn’t know the district, he doesn’t grasp the district’s unique issues.

He rose to notoriety when Trump nominated him to become veterans affairs secretary. The problem, though, was that Dr. Jackson faced accusations of falsifying prescriptions, of abusing his staff and of drinking too much on the job. He was unqualified for the VA post. He withdrew his name from consideration. The president went with someone else and the Department of Veterans Affairs is running just fine.

So what in the world of soft landings is Admiral/Dr. Jackson seeking to do now? He wants to serve in Congress. Why, though, pick this particular seat? I guess it’s because the 13th District is as reliably Republican as any of the 435 House seats.

But Jackson isn’t the guy to succeed Thornberry. Indeed, the GOP field is full of candidates who actually live in the Texas Panhandle and who actually understand the issues of constituents’ concern.

Ronny Jackson? Don’t let him get away with the charade he is playing.