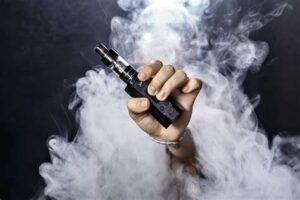 Get ready for it. I am about to say something positive about the president of the United States.

Donald J. Trump is absolutely correct to call for a ban on the sale of those “flavored” e-cigarette devices (I think that’s what you might call ’em) in an effort to stem the use of vaping among youngsters.

The president today spoke of his own vested interest in the banning of them, noting that he and first lady Melania Trump are the parents of a teenage son who is part of the generation that is drawn to those weird flavors.

Actually, the president referenced the first lady exclusively, saying “she has a son” and, thus, has skin in the game.

Whatever. He is correct to demand stricter prohibitions regarding vaping, which is producing serious illness and death among youngsters all over the country.

My wife and I are in Bellingham, Wash., tonight and local news reports referred extensively to the state’s first vape-related death.

It’s an epidemic. Its most vulnerable victims are gullible youngsters, boys and girls, who are lured to try this new fad. I always thought e-cigarettes and vaping were somehow safer than the old-fashioned cigarettes I used to smoke.

Now this vaping craze has produced flavors: cotton candy and other assorted scents that I guess young people find appealing.

Honestly, I don’t quite yet understand the vaping craze … other than I want no part of it. I quit smoking cigarettes cold turkey nearly 40 years ago. It is one of the things I’ve done in my life of which I am most proud.

If we can dissuade young people from vaping and exposing their lungs to the hazards of nicotine, then I’m all for that, too.

To that end, I applaud the president for using his high office for a noble cause.