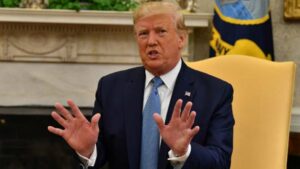 The president campaigned as a sort of “conservative populist,” although there seems to be a counter-intuitive tilt to that description.

Millions of Americans swallowed the bait. Millions more of us spit it out.

For me, I am left to wonder: If the president is such a conservative icon and a believer in conservative principles, ideology and principle … why are so many notable conservative thinkers turning on him?

There might be a couple of thoughts at play here. One is that Trump is not the conservative he purports to be. Another is that actual political conservatives — except for evangelical Christians — are appalled, astonished and aggravated at this man’s history of hideous behavior.

Those are just a few names. They all have significant megaphones from which to comment on the state of political play.

I continue to maintain that Donald Trump is the classic, quintessential Republican In Name Only. He is the RINO’s RINO. I get that he appoints conservative judges and names conservatives to surround him within the White House.

He’s not the real deal. Donald Trump is a panderer who doesn’t understand how government works. He built his business career with one aim, to fatten his wallet and enrich his brand. He is a serial liar who is unwilling to tell the truth at any level.

True conservatives should have nothing to do with this individual. A good many notable conservatives have been willing to speak out and to declare their antipathy to what this man is pitching.