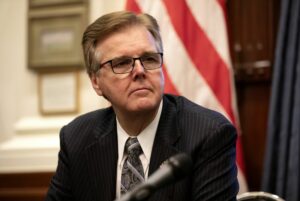 Texas Lt. Gov. Dan Patrick said the following, among other things, on “Fox & Friends”: “We’ve always had guns, always had evil, but I see a video game industry that teaches young people to kill.”

He cited other causes as well, as did Donald Trump, the president of the United States.

Patrick, quite expectedly, didn’t attribute any of the hatred that erupted in El Paso over the weekend to the rhetoric that has come from the mouth of POTUS. Oh, no! Nothing there.

This is where Republicans’ defense of the president breaks down. Donald Trump does not own any responsibility for the way he talks about Hispanics, about African-Americans, about any people “of color.” Nor do many of those who support him.

Lt. Gov. Patrick has held up video games that teach young people “to kill” as a primary cause of what transpired in El Paso. To be fair, Patrick does call the massacre a “hate crime.”

Fine, so far. Why not take the next logical step, though, by identifying the catalyst that lit the spark of that hate and resulted in the slaughter of those innocent victims?