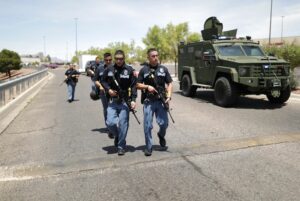 Donald J. Trump is set to fly to El Paso, Texas, later this week in the wake of the massacre of 22 victims at the Wal-Mart shopping center.

Democratic presidential candidate Beto O’Rourke said today that the president should stay away. So has O’Rourke’s successor in the U.S. House district he represented for six years in Washington, Veronica Escobar, another Democrat. They both say the president isn’t welcome in their city.

“He’s helped to create what we saw in El Paso on Saturday,” O’Rourke told the El Paso Times. “He’s helped to produce the suffering that we are experiencing right now. This community needs to heal.”

Oh, boy. I happen to believe the president should go to El Paso; he also plans to visit Dayton, Ohio, which erupted in gun violence hours after El Paso suffered its grievous wounds. And, yes, he faces the prospect of getting an unfriendly welcome from angry El Paso residents.

Donald Trump is facing the most serious quandary perhaps of his presidency. What in the world does he say when he visits with victims? Is he capable of holding himself accountable for the actions of a lunatic who drove 660-plus miles from the Metroplex to inflict such damage?

If lightning strikes and hell freezes over, perhaps there’s a chance he’ll do what he needs to do, which is take responsibility for fueling the anger that erupted at the Wal-Mart in El Paso.

I am not going to bet the farm on it.