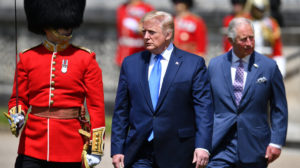 Washington Gov. Jay Inslee drew the biggest round of cheers tonight with what might have come off as a quip, but which — the more I think about it — now sounds like the brutal truth.

He and the nine other Democratic presidential candidates gathered on the debate stage in Miami were asked to name the greatest geopolitical threat to the United States: Inslee said it is Donald John Trump.

Not Russia. Nor the People’s Republic of China. Or Iran. Or terrorist organizations. Or even climate change, which happens to be Inslee’s signature campaign issue.

He said the biggest threat is the president of the United States of America. I agree with him.

Donald Trump is systematically destroying our alliances with Europe, with Asia, with Latin America. He’s gone after Australia and Canada, for crying out loud!

Donald Trump has isolated the nation from the rest of a shrinking world. He cozies up to tyrants — Kim Jong Un and Vladimir Putin being the most notable. He challenges the nation’s intelligence network’s findings. He makes foreign and domestic policy pronouncements via Twitter, without advising his senior policy  advisers.

Trump has burned through two national security advisers. He is talking openly about possible war with Iran without a defense secretary on board. He is reportedly losing patience with his third White House chief of staff.

Yes, Gov. Inslee was right. Donald Trump has become the greatest existential threat to the very nation he was elected to govern.