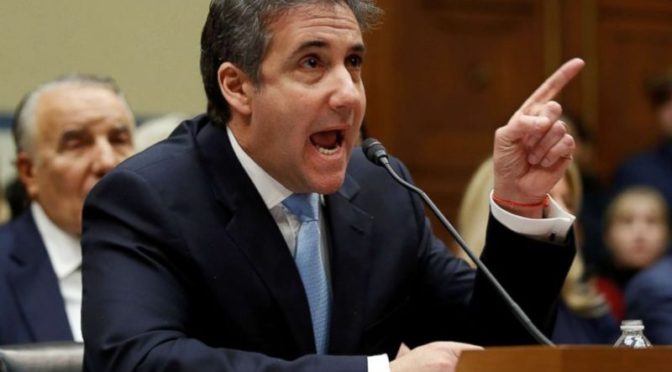 I have one more takeaway from this past week’s congressional hearing involving Michael Cohen, the former friend and fixer for Donald J. Trump.

Cohen sat before the House Oversight and Reform Committee and called the president a “racist, con man and a cheat.” He blistered Trump with a series of allegations involving campaign spending violation, tax fraud, potential conspiracy to collude with Russian officials and a host of other matters.

The House panel that heard Cohen’s remarks. Democrats asked him to elaborate on his allegations. The Republican response was most instructive.

The GOP members on the committee did not defend the president. They did not stand up for his morals, for his ethics, his behavior.

Instead they focused their fire directly at Cohen. They pointed out time and again that Cohen was an admitted liar. They sought to remind us that Cohen is going to prison for pleading guilty to lying to Congress. They sought to shred his credibility.

Of course Cohen is not a good guy. He is a liar, even though he proclaimed that he is not — despite having admitted that he lied to Congress. Go figure, will ya?

The point here is that congressional Republicans on the Oversight and Reform panel did not bother to defend the guy outwardly, verbally and with any sense of sincerity. They didn’t say that the president is an upstanding man of high moral character; they didn’t stand up for him as a dedicated public servant.

They sought instead to divert our attention away from what their witness was telling them.

How come? Is the president’s conduct, um, indefensible?