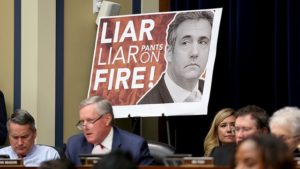 Get a load of this picture, taken today at the House Government Oversight Committee grilling of Michael Cohen, the former friend/fixer/lawyer for Donald J. Trump.

Committee Republicans are attacking Cohen as a liar, a convicted liar at that, a guy who’s headed for the slammer in the very near future. They don’t believe him when he says he’s telling ’em the truth about what he knows about Trump.

What astounds me to the max is how these individuals can take themselves seriously, given that their party’s chieftain, the president of the United States, is arguably the most egregious liar ever to take up residence in the White House.

Donald Trump lies to our faces. He lies when he doesn’t have to lie. He says things he must know are false, but he says them anyway.

My amazement stems from Republicans’ inability or unwillingness to recognize what the president has done while seeking the nation’s highest office and while has served in it.

He has lied repeatedly, gratuitously and without regard for the consequences of what his lying has done.

And so now they are attacking Michael Cohen, who has acknowledged his guilt as a convicted felon, an admitted perjurer, as a liar? Give . . . me . . . a . . . break!

2 thoughts on “How do these politicians get away with this?”