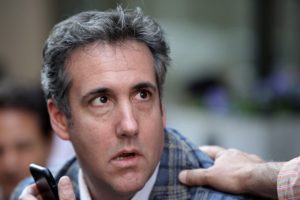 I’ve been trying to digest the daylong testimony given by Donald Trump’s former lawyer, his former “fixer,” his former confidant.

I’m not sure where to start. I guess anywhere is as good a place as any to begin pondering.

I’ll start with this: Michael Cohen said during his lengthy opening statement that the man for whom he worked for a decade never — in Cohen’s presence — uttered a single word or sentence that wondered about how he could do good for the country.

That was among the most instructive and edifying assessments of the president that I’ve ever heard. It also rings so very true to my ears.

I have said ever since Trump declared his candidacy for the presidency that his entire professional life has been geared toward one goal: self-enrichment. Cohen’s assertion that Trump has never spoken out loud about how he could make the country a better place seems to affirm the view that Trump’s sole focus is on his brand, his reputation, his own self-worth.

Of course I cannot speak to what the president says in private. I certainly have heard what he has said publicly. He speaks about the trade deals he intends to broker to help preserve Americans jobs. He talks about treaties he denigrates as being cobbled together by fools who ran the government before him.

The view that Cohen expressed today, though, about Trump’s overarching motivation for doing anything is aimed at helping his brand sounds so, shall I say, Trump-like.