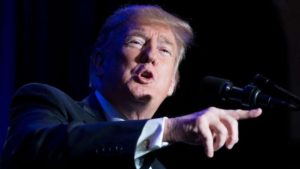 How many times does one have to tell you, Mr. President, that you are not a monarch, or a dictator? You cannot bring “retribution” against a comedy show made famous by its parodies of powerful people.

But there you go again, threatening “Saturday Night Live” because it decided to spoof you yet again.

“SNL” trotted Alec Baldwin out to do that hilarious send-up of you and you just cannot stand being ridiculed. C’mon, Mr. President! Get a grip.

The comedy show has been doing this to presidents since 1975, when Chevy Chase poked fun at President Ford. It hasn’t stopped. They’ve all gotten the treatment. Not a single predecessor of yours has threatened “SNL” with any kind of political or legal payback.

Your tweet about “SNL” was typically idiotic. As a reminder, you wrote:

Nothing funny about tired Saturday Night Live on Fake News NBC! Question is, how do the Networks get away with these total Republican hit jobs without retribution? Likewise for many other shows? Very unfair and should be looked into. This is the real Collusion!

Total Republican hit jobs? They “get away” with it the way “SNL” poked fun at Presidents Carter, Clinton and Obama. Those Democrats didn’t bitch constantly about “SNL.” For that matter, neither did the Republican presidents who had to take the heat, too.

I am tiring of repeating myself, Mr. President. Still, it bears repeating that you need to understand that positions of power invite this kind of treatment from the entertainment industry and the media. You are the most powerful man in the country, Mr. President.

You can act like it simply by stopping these mindless, brainless and feckless threats against a TV comedy show.

One thought on “No ‘retribution,’ Mr. President; it’s not possible”