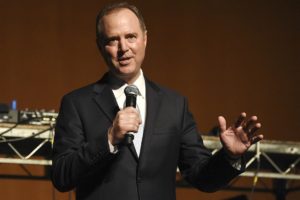 It’s been known for a while now, but I’ll just weigh in anyway.

He’s been known to hang disparaging nicknames on political foes. He’s gone beyond the realm of decency with this one.

Isn’t that a knee-slapper? No. It isn’t. It’s a vulgar epithet that Trump appears to have slung at the California Democratic lawmaker on purpose.

Politico reports that Schiff had a response: “Schiff fired back 35 minutes later, quoting the president’s post and writing on Twitter: ‘Wow, Mr. President, that’s a good one. Was that like your answers to Mr. Mueller’s questions, or did you write this one yourself?'”

Trump sought to make some reference to Schiff’s criticism of the appointment of Matthew Whitaker as acting attorney general, suggesting that special counsel Robert Mueller should have been confirmed by the Senate before he started his investigation into alleged collusion with Russian government goons who attacked our election system in 2016.

But … of course the topic of discussion has centered on the vulgar response Trump provided.

To think that the president’s political “base” continues to adore him.