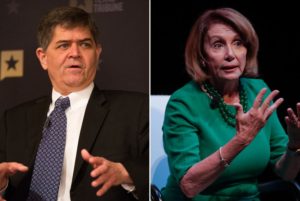 Newly empowered U.S. House Democrats are playing with fire if they find a way to push their longtime congressional caucus leader out of the speakership.

Nancy Pelosi once served as the nation’s (so far) only female speaker of the U.S. House of Representatives. She wants her old job back now that Democrats have retaken control of the People’s House.

But … not so fast, Mme. Presumptive Speaker.

Some of her colleagues want her kicked to the curb. They want “new leadership.”

Let’s ponder this for a moment. The 2018 midterm election resulted in more than 100 women will join the House in January 2019. That makes this the Year of the Woman. Or does it?

I happen to believe Pelosi deserves to become speaker when the new Congress convenes next year. Thus, I want to caution the Democratic insurgents that they are dousing their own message if they manage to boot the veteran lawmaker out of the office she presumes is hers for the taking.

I just learned that one of the Democratic insurgents is U.S. Rep. Filemon Vela of Brownsville, who is casting doubt on Pelosi’s intended speakership. He says he believes “new leadership” is in order.

Yes, that’s a man saying it.

Pelosi’s first tenure as speaker (2007-2011) proved to be successful in terms of her organizational skills and her ability to hold her party caucus together. Indeed, she enjoyed far more success at that aspect of her job than her two Republican successors as speaker — John Boehner of Ohio and Paul Ryan of Wisconsin — who had to battle with TEA Party and Freedom Caucus members of their own caucus.

It was on Pelosi’s watch that Democrats were able to enact the Affordable Care Act, legislation I consider to be a success.

So now Democrats think they need “new leadership”? They don’t, even though Pelosi has become a favorite punching bag for Republicans to pummel whenever they can find the opportunity. Indeed, one could hear Pelosi’s name in TV ads criticizing Democratic candidates for Congress. Here’s the catch: One of those Democrats, Colin Allred, had been joined at the hip to Pelosi by North Texas U.S. Rep. Pete Sessions; however, Allred defeated the Republican Sessions in the midterm election.

So, is it really a negative to be led by a speaker who knows how to legislate, how to organize an unruly body of lawmakers? I don’t believe so.

My advice to House Democrats? Be very careful if you seek to topple Nancy Pelosi in this Year of the Woman.